This mount does NOT fit C39 or RAS-47 rifles (see our M2-B for those), nor does it fit most other AK pistols. If you're trying to outfit some other AK pistol or SBR, remove and check your piston tube overall length (OAL) to be sure. An UltiMAK mount should be roughly one eighth inch shorter than your original factory piston tube.

Bulletin; Some C39V2 pistols, and possibly a few RAS-47 pistols, were made using the standard rifle gas system length. Remove and measure your piston tube if you are unsure. If you have the standard rifle piston tube it will measure slightly under 7 inches overall. If that is the case you want the M2-B listed near the top of this page. Don't say we didn't warn you. Nominal design length for all our AK mounts is one eighth inch less than the factory tube being replaced.

Shown at right on a C39 pistol, the forward, low mounting enabled by the UltiMAK system provides a better, more sensible optic sight height, without adding weight or bulk to the gun. Our C39 pistol requires the shims. whereas the V2 model we tried did not. The M17 optic mount allows co witnessing of the iron sights with most tubular reflex type sights, such as Aimpoint. The railed, synthetic lower handguard shown will require slight modification (See Below)*.
M17 on Century Arms C39 Pistol
Here is the M17 on the C39V2 pistol. This installation did not require shims, and Magpul lower handguard made the process very easy. With QD sling sockets all around, front and back and the mini AFG, this is a versatile setup. All it needs is a quality optic sight, mounted low for co witnessing and you're good to go.    M17 on C39V2 Pistol
Here you see the M17 mounted on the RAS-47 pistol with the Aimpoint Micro H1 Standard. The Magpul handguard shown is fully UltiMAK compatible, allowing a simple, drop-in installation with no shims. Notice how the UltiMAK M17 optic mount is integrated seamlessly into the gun's profile.    M17 on RAS-47 with Magpul handguard
*The plastic (synthetic) handguard at right will need to be cut down slightly as shown. We started with a bench grinder and then finished it off with a file. The object is to remove interference with the M17 optic mount by taking off a small portion at the middle of the top of the handguard (see red line). When finished, the M17 optic mount should not contact the handguard. Quite simple; it only took a few minutes.    Plastic, railed handguard modification for UltiMAK M17
**Our C39 pistol (shown above) has the smaller barrel of ~0.6" diameter at the optic mount clamping position inside the lower handguard. That small diameter is usually only found on a certain few AKs chambered in the 5.45 and 5.56 mm calibers. A ~0.6" barrel requires our shim set SH-1. It is therefore a good idea to measure your barrel diameter about one to two inches in front of the rear sight block. The lower handguard will need to be removed to take the measurement. An approximate barrel diameter of 0.6" (about 0.595" to 0.610") requires the shims. A barrel of approximately 0.7" does NOT need shims. Our RAS-47 pistol does NOT need shims, NOR did the C39V2 we tried. Shown at right on a Romanian AKM-74, you see the shims in place. This photo also depicts the position of the barrel clamps relative to the rear sight block on these AK pistols. 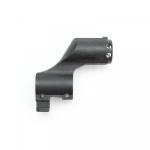 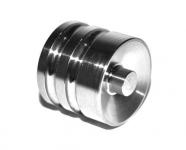